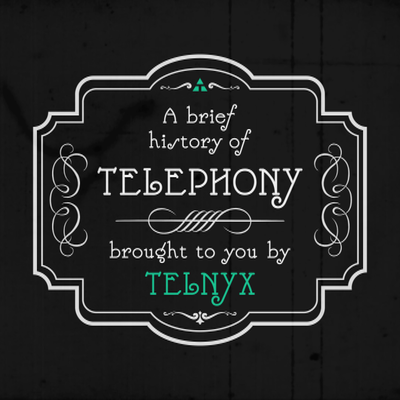 Imagine a time without the telephone and the technology behind it - I surely couldn’t! And we’ve come such a long way from smoke signals and snail mail, but it’s always good to look back and see how we got here. So we welcome you to a brief history of telephony, where we explore where we started and where we're headed.

We should all know to thank Alexander Graham Bell, who’s credited with patenting the first practical telephone on March 7, 1876. Three days later, he transmits the phrase "Mr. Watson, come here! I want to see you!" We wonder if he realized then how his invention would completely revolutionize the way the world communicates today!
It took almost 40 years from Bell's historic call to the first coast-coast call to be possible. The network started in New York City in 1885, reaching Chicago in 1892. The long distance line headed west throughout the years, and it reached Denver by 1911. On January 25, 1915, Alexander Graham Bell officially inaugurated the launch of the AT&T transcontinental phone service in New York as he called Thomas Watson in San Francisco.

Into the 20th Century

The first free-standing rotary phone was introduced in 1919. The candlestick was initially the most popular style of telephone. The Model 302 by Western Electric and Bell System was introduced in 1937, which featured the boxed design that was popular in the middle of the 20th century.
Although one-way transatlantic telephone communications happened over a decade earlier, it really wasn't until January 1927 when the first official two-way commercial transatlantic telephone call happened via radio. Listen to the conversation between Sir Evelyn P. Murray in London and W.S. Gifford in New York below, courtesy of the History Channel:

Mobile service for car telephones became official on June 1946 in St. Louis, Missouri thanks to Bell Labs. Shortly after, the idea of a hand-held mobile phone proliferated in science fiction and pop culture in the 50s and the 60s. TV shows depicted such phones as spy gadgets hidden in common items like - you guessed it - a shoe. Realistically, mobile phones at the time were still pretty huge, with car phones weighing as much as 80 pounds! The image below of the Motorola TLD-1100 from 1964 is an example.
Launched on September 25, 1956, the Transatlantic No. 1 (TAT-1) was the first submarine transatlantic telephone cable system. It was an iconic moment that signaled the true era of modern communication around the world. According to BT, the project was inaugurated by the Chairman of AT&T in New York who called the Postmaster General in London, England.

The first official handheld mobile phone call happened on April 4, 1973. Motorola executive Martin Cooper used a DynaTAC prototype to call Joel Engel of Bell Labs. Unfortunately, the world had to wait for a decade before Motorola released the phone to the public!
Guessing who was calling became a thing of the past when Japanese inventor Kazuo Hashimoto invented the caller ID in 1976. Patent 4,242,539 was eventually licensed to most telecom companies around the world. However, it wasn't for another decade that the technology was released publicly. Market trials ran in 1984 but true commercial deployment didn't happen until 1987.
Network Voice Protocol - one of the earliest iteration of Voice over Internet Protocol technology - was first successfully tested in December 1973 by Danny Cohen at the Information Sciences Institute, University of Southern California. According to ISI, NVP was used to send speech over packetized communications networks on the ARPANET.

After successfully being tested 10 years prior, the DynaTAC 8000X mobile phone was ready for the spotlight. Nicknamed "the brick," the phone was officially unveiled in 1983 with a $3,995 sticker price, according to NBC News. The image below is of Martin Cooper, the Motorola executive who made this all possible.
The installation of TAT-8 was completed on December 14, 1988. This was a revolutionary moment for communications around the world - this was the first transatlantic fiber optic cable system ever. The technology was capable of handling 40,000 simultaneous phone calls compared to its predecessor TAT-7, which was only able to handle 4,000.

VocalTec changed the game in 1995 when it released the InternetPhone - basically pioneering the VoIP revolution. Considered as the first commercial VoIP service, the fees charged by the company was still a fraction of the price for international and long distance calls charged by telephone companies at the time
The Session Initiation Protocol was created in 1996 by Mark Handley, Henning Schulzrinne, Eve Schooler and Jonathan Rosenberg. It was initially designed as a communications protocol to signal and control multimedia communication sessions. These days, SIP is most commonly used for internet telephony like voice and video calls.
Released in August 1996, the Nokia 9000 Communicator was a game changer. Considered to be one of the first commercial smartphones, the Communicator provided all the functionality of a desktop, from email to web surfing, all in the palm of your hand.

From the Past to the Present

Skype took what VocalTEc started with VoIP and ran with it. Launched in August 29, 2003, the software would revolutionize the way people communicated through their computers, using voice and video to give a new profound experience to its users. Most importantly, the service was free.
The growth of Unified Communications accelerates in the 21st century. A concept which involves the integration of voice, email, instant messaging and video conferencing, among others, UC adoption is on the rise, with 44% of businesses having deployed or are in the process of deploying a UC solution in 2015, according to XO.
There were about 340,000 wireless subscribers in the US in 1985. That's about 0.1% of the total number in 2015 at 300,000,000, according to CTIA! Data on global mobile subscription in 2017 by GSMA intelligence puts the total number at 4.9 billion in 2017!

What's in Store for Telephony?

The Internet of Things will eventually take over, with Gartner forecasting that 20.8 billion connected things will be in use around the world by 2020.
VoIP will continue to disrupt telecommunications, grabbing a bigger slice of the pie. Zion Research predicts the industry to be worth above $140 billion by 2021, a huge jump from its $83 billion market value in 2015.
"Communications is going to be one of the big ones," said former Oculus CEO Brendan Iribe on the future of VR. Imagine being with a friend or loved one - who's on the other side of the globe - in a virtual world and communicating with them like they're next to you. Facebook demoed this last year:
Share on Social