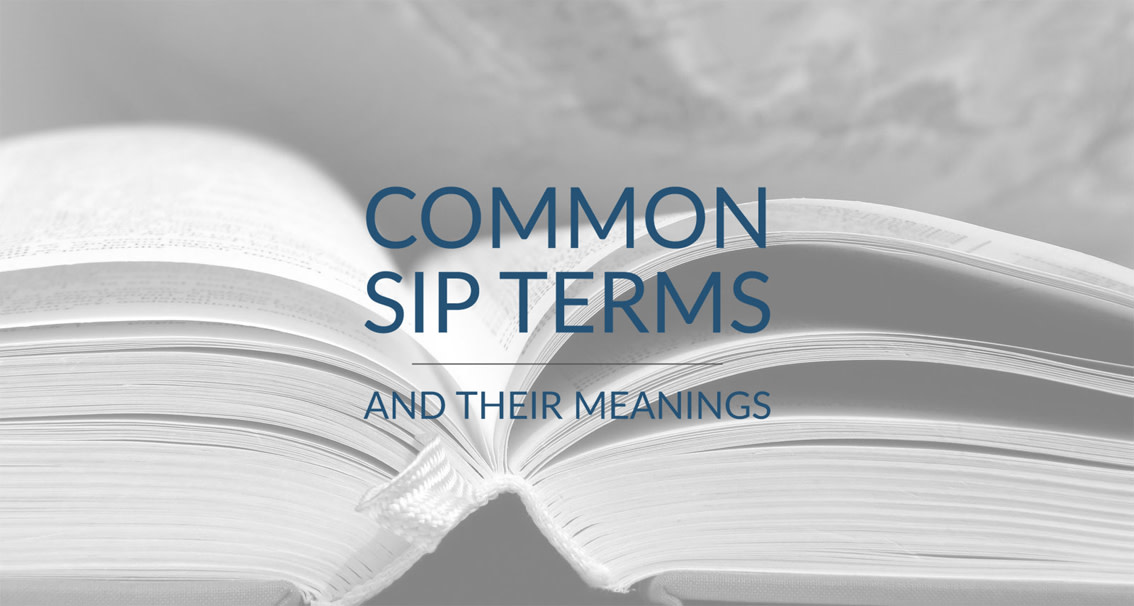 Have you ever wondered about the origin or meaning of a particular acronym or buzz word in telephony? In this blog post, We're breaking down some common SIP terms and discussing their use and meaning in the VoIP world. We'll cover telephony data like CNAM or LRN, common metrics to measure performance like ASR, legal terms like LOA and everything in between.
VoIP: Voice over Internet Protocol – also known as IP telephony, is where communication services such as voice, fax, SMS and voice messaging happen over the public internet rather than the public switched telephone network.
PSTN: Public switched telephone network – The world's circuit switched telephone network.
POTS: Plain old telephone service – The predecessor to the PSTN, employed using analog signal transmission over copper loops.
SIP: Session initiated protocol – This protocol sets up the session between the individuals over the Internet.
RTP: Real-time transport protocol – This protocol is what actually sends the media when the session is established.
Soft Phone: These are software versions of phones that can be installed on your computer devices. A benefit is that they offer great flexibility when traveling and can be used as long as you are connected to the internet.
Hard Phone: These are physical phones set up usually beside your computer or laptop.
CLI: Calling Line Identification – The number associated with the person initiating the call, or the caller.
CLD: Calling Line Destination – The destination number for a call, or the callee.
CNUM: Caller ID Number – Refers to the telephone number of the calling party on an inbound call.
CNAM: Caller ID Name – Refers to the name associated with the CNUM of the calling party on an inbound call.
Attempted calls: The total number of calls that are made, whether they complete or not.
Connected calls: The number of calls attempted that return SIP code 200, 403, 408, 486, 487 or 480
Completed calls: The number of calls attempted that return SIP code 200
Duration: The length of the call, defined as from the INVITE to the BYE.
Billed duration: The billed length of the call, according to the billed intervals. For instance, if you are billed with 60/60 intervals, your billed duration will be rounded up the nearest multiple of 60, in seconds.
ASR: Answer Seizure Ratio – This is a common metric used to track call success rates. ASR is calculated as the percentage of attempted phone calls divided by the total completed calls.
ACD: Average Call Duration – This is the average length of the billed duration of completed calls.
SDC: Short Duration Calls – These are calls that are less than 6 seconds in duration. This metric is commonly used to distinguish dialer traffic from conversational traffic.
NER: Network effectiveness ratio – Measures the ability of a network to deliver a call. This is calculated by dividing connected calls by attempted calls.
CDR: Call Detail Record – These records describe the characteristics of a call, in table format, Telnyx's CDR's include the following:
TN: Telephone number.
ANI: Automatic Number Identification – A feature that automatically determines the source telephone number on toll calls for billing purposes.
LRN: Local Routing Number – This is used for billing and is a unique 10 digit number that has the format of a telephone number. It isn't a telephone number but represents an entire telephone switch where all the telephone numbers are routed. This allows for local number portability.
NPA: Number Planning Area – A defined geographic area identified by a unique 3 digit code used in North America.
NXX: This part of the number identifies the central office, otherwise know as the Exchange, with the NPA, in North America
XXXX: This part of the number identifies the station within the NXX in North America
DID: Direct Inward Dial – Telephone numbers allocated through one or more trunk lines for a connection to a customer's PBX. All calls will be forwarded to these telephone numbers via the trunk.
PBX: Private Branch Exchange – A switching system that connects internal phones within a business and also connects them to the PSTN, VoIP providers and SIP Trunks.
TFN: Toll-Free Number – Toll-free numbers allow callers to reach businesses and individuals without being charged for the call.  The called person is charged for subscribing to a toll-free number instead of the caller being charged for calling it.
SIP TRUNK: A virtual phone line which is provided by a SIP trunk provider like Telnyx. We use your data circuit, whatever that may be, (T1, cable modem, DSL, Ethernet over copper) to connect your phone system back to our network.
FOC: Firm Order Commit – An installation date for services, usually used for number porting between service providers.
LOA: Letter of Authorization – The customer needs to fill this out when switching telephone provider. It is a document that allows the new telecom provider to act on the customer's behalf. Used when you want to keep your current telephone number or any other service which requires the transfer of information from one telecom provider to another.

INVITE - Indicates a client is being invited to participate in a call session
ACK - Confirms that the client has received a final response to an INVITE request.
200 OK – Indicates the request was successful
!80 – Destination user agent received INVITE, and is alerting user of a caller
183 – This response may be used to send extra information for a call which is still being set up
BYE – Terminates a call and can be sent by either the caller or the callee
Share on Social